You may have been living the past few years under a rock, in a cave, on an alien planet with no satellite TV or internet access.  So you probably have no idea who Lindsay Lohan is.  Even those of us who HAVE remained consistently on this planet have a hard time going back far enough in the recesses of our brains to remember WHY we know who Lindsay Lohan is.  Then we vaguely recall the cute, freckled face from The Parent Trap, and we wonder what the hell happened. 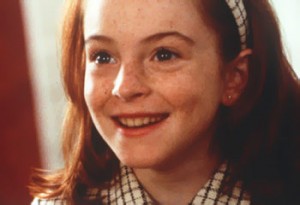 I am forever optimistic when it comes to people.  I believe that we are all products of our childhood environment, and it’s not necessarily our fault we turn out the way we do, but it is our responsibility to work on changing the things that are not valuable personality characteristics.  We have to figure out a way to get along in life.

So who is to blame for the screw up that is Lindsay Lohan?  Have ya got a pen?  And a couple of sheets of paper?  And a whole lot of time?

Let’s just go back to this morning.  Part of Lindsay’s new world order, according to the judge yesterday, was to show up at 8 o’clock this morning for blood and guts duty – cleaning up the morgue.  She was going to be wiping down tables, sweeping and mopping floors, and making herself useful around the recently deceased.  At 7:40, her ASSISTANT called to notify the morgue that she was ten minutes away, which would have put her in the right place at ten minutes before the right time.  Good for her!  By 8:20, she still wasn’t there.  At some point after she was already 20 minutes late, the morgue was called to say that she would have been there on time, but she didn’t know what door to go in.  And there was way too much media attention for her to get through.  And Starbucks put full fat milk in her skinny latte (okay, I might have made THAT one up).

So what the hell is the assistant for?  Did she assist her in getting her ass out the door this morning?  Apparently not.  Did she assist in finding out which entrance she should go into?  No.  How about when she called to say they were 10 minutes away – did she inquire then about alternative entrances?  Nope.  Did she call at 8 AM to say they had arrived but couldn’t get in?  Uh-uh.  Does she assist in keeping Lindsay clean and sober.  Uh, hell no.  Keep her from shoplifting?  Nah.

Let’s start here with the ass kicking.  What exactly is an “assistant” getting paid for if the only assistance they are providing is the assistance you DON’T need to get into trouble?

And how about that mom?  The one who consistently says Lindsay is “Fine!”, “Great!” “Doing well!”  Has she seen her daughter?  Can she notice that her 25 year old daughter certainly doesn’t look “fine”?  Is she doing Lindsay any favors by telling the world how fabulous her daughter is?  Keep the ass kicking ball rolling. 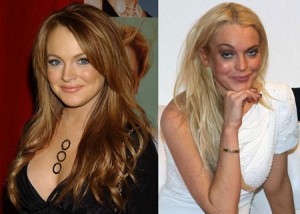 What about Daddy Lohan?  No stranger to legal problems himself, he, ironically, often seems to be the voice of reason.  He publicly pushes for Lindsay to get treatment.  He’s always talking to this reporter or that news outlet about his concern for Lindsay.  Perhaps he should have been talking to Lindsay from day one.  Kick this ass, too.

Then there’s the collective “us”.  The ones buying the magazines that love to publish photos of Lindsay at her worst moments.  Lindsay in need of serious dental work – front page of the Star.  Lindsay falling down drunk? OK Magazine.  Lindsay snorting cocaine in a hotel room? The National Enquirer will run that one.  Are you clicking in to read your daily dose of Perez Hilton?  Yeah, me too.  Do we deserve an ass kicking?  Yeah, probably.

I hope someone can save Lindsay before she becomes a member of the infamous Forever 27 Club.  It’s not looking good at the moment, and I hope that the judge who has revoked her probation can get her behind bars for longer than 20 minutes, where maybe she’ll get some help for her addictions.  Or maybe the legal system, the last line of Lindsay defense against her demons, needs an ass kicking, too.